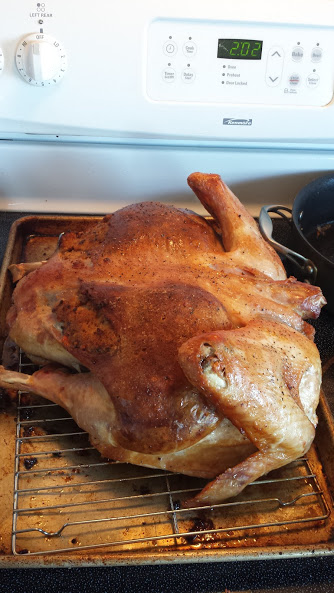 I was really excited to try cooking the turkey two years ago after I watched one of my favorite cooking shows called “The Chew”. I was so nervous about trying to cook the turkey, so I always tried to avoid cooking it so one year after watching an episode on the Chew I decided to attempt cooking the Turkey for the first time.

There are a lot of reasons why this is the best turkey I have ever eaten. First of all you cut out the breast bone of the turkey and lay it out open. This will cause the turkey to cook faster and more evenly. We also stuff the stuffing under the skin of the turkey this will baste the turkey meat ask it is cooking. The turkey will end up moist an very flavorful! when chopping your veggies try to get them all the same size so they cook evenly.

← LEGO The lord of the Rings
Those who have Special Needs help us see beauty! →